In my previous post, I talked about the Minimap screen and the Lifts screen which are both parts of the console display within the game. The console screen also has a wealth of additional information about the droids, deck plans and the layout of the current dreadnaught. You can access the in-game console by going in front of the terminal and pressing fire. 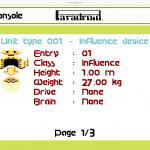 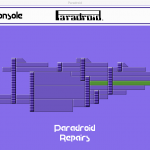 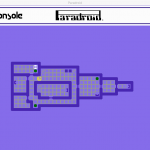 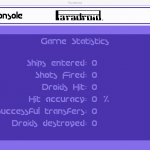 Once you access the Console screen you have five options:

All of the droid data has been stored in various data structures, using look-up tables for descriptions. The information displayed on these console screens has been done using several different ‘surfaces’ with Game Maker, which is a way of loading in an image and then chopping bits out to display in different areas on the screen – like textures, in fact.